One of the assignments in my college photography class was a self portrait. I shot a series of reflective portraits, my imprint on things like my leather bike seat, the soles of my shoes, and the fading on my jeans. This is another in that series.

Tina didn’t like the orange-hued leather of my iPhone case when I first got it, but it has darkened as I held it and my skin oils worked into the surface. The frame broke in one area, so I replaced it with the same model, but you can see the effect of my hand holding the leather over two years.

Guess which is old and which is new.

Thanks to Peter Brown for making an introvert shoot self portraits. And the real winner from that series wasn’t the imprints, but a straight shot of myself where I wrote the enlarger exposure on the front of the print instead of the back. I’ll post that sometime.

The background? That is a cube-crate from Ski Hut. It is sized just right for LP records. It says “Ski Hut” and below that “Berkeley” and “Palo Alto”. We have two of those, serving as end tables in the family room.

Feel the need for more trail selfies? Instead of a heavy tripod, support your iPhone for 38g (1.3 ounces) or your small camera for 30g (1 ounce). This kit goes on top of regular bottles like the 1 liter sparkling water bottle that is always in my pack.

There are two basic parts: a water bottle camera mount and a tripod adaptor for an iPhone (or other phone). If you have a lightweight camera, you can skip the phone mount and save 8 grams.

Bottle cap mount: $10, 30g. This fits on the top of a regular small mouthed bottle. I carry a one liter sparkling water bottle (stronger than still water bottles), so I always have one of these. I wouldn’t support my DSLR with this, but it is fine for a light camera or phone camera. I got my bottle cap camera support from Photojojo.

Glif: $20, 8g. This is how an iPhone is mounted on a tripod screw. The Glif Original is sized for a bare iPhone 4/4s or 5/5s, depending on the size you order. Mine is for an iPhone 4/4s, but fits my thinner 5s with the Apple leather case (see the photo above). If you have a different phone or want an adjustable mount, get the New Glif for $30. I don’t know how much the New Glif weighs, but I expect it isn’t much heavier than the Glif Original.

Here is the New Glif (adjustable).

The final touch is a camera app that has a self timer, unlike the built-in Apple camera app. I use Camera Plus, which costs a whopping $1.99 and adds more features than you probably need, though it does have that essential selfie feature, the self timer.

How good is it? I took this selfie during a ham radio activation on Black Mountain. Looks good to me, good enough to put on my QSL card after I cropped it a bit. 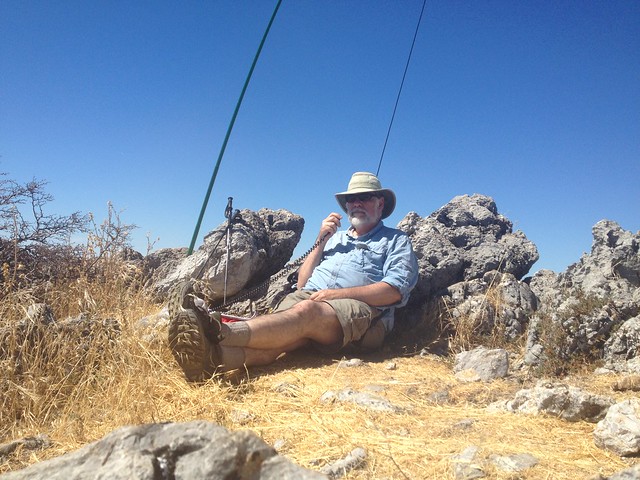 There is a little-known campsite at Mission Peak, but it is one of my favorites. The views are wonderful and it is a perfect base camp for catching a sunset from the peak, or a sunrise, if that is your persuasion.

My wife and I restarted our backpacking with an overnight to this spot, accompanied by another couple. This was my first non-Scout backpacking in years, and it was lovely.

Mission Peak is a very popular hike—we were amazed at the number of people up there at sunset. The rest of them had to hike all the way out in the dark. We strolled back to our campsite. This photo is only a sample, we counted over fifty people. It was a party.

Eagle Spring Backpack Camp is just north of Mission Peak at about 2100 feet (roughly 400 below the summit). Make a reservation through the East Bay Regional Parks District. The park website has a nice PDF map, though you’ll probably also need a Sunol Regional Park map (if you take my advice).

I like hiking Mission Peak from the Sunol Regional Park trailhead, especially for an overnight. Most people take the 3+ mile trail from the Fremont side, but that is steep for backpacking and the parking is problematic. Starting from Sunol adds an entrance fee and a $2/person Ohlone Wilderness access fee, but the trail is a nice, steady spread climb over five miles and the park closes at night, so your car is relatively safe. Most of the trail is a fire road, perfect for groups who like to chat on the trail. Vintage gear connoisseurs might want to check out Tina’s Lowe Alpine Systems pack.

All of the campsites have clear views north to Mount Diablo. Three are out in the open, and one is up a rise and sheltered under a spreading California bay laurel. Tina likes trees, so we camped there.

Climb the peak from the south side. The north approach is a too-steep, rutted mess. The southern trail to the peak is a regular trail in fine condition. Even on a day hike from the north side, it is worth going around.

And if you are still not sure about the view from this camp, here is a something from an earlier trip. Think about all those people heading home on the I-680 freeway while you are relaxing with a priceless view of Diablo. This is one of my favorite computer backgrounds. Feel free to use it.

FInally, here is a Flickr set from the trip. It is short, less than twenty pictures. I’m a tough photo editor.

Leo Holub died April 27th, age 93. I didn’t know Leo well, but his student was my teacher, and it is clear that he taught well.

I studied photography for a year with Peter Brown at Rice University. Peter had studied with Leo Holub at Stanford.

Leo visited our class once, I think in the spring of 1981. That would have been right after he retired from Stanford. Peter was delighted that he was there and clearly deferential. When you are a student, it is a bit of a surprise to see your professor turn into a student. That is when you really see the long chain of teachers and students. Who will I teach?

Peter showed us some of Leo’s recent photos of California ghost towns. Leo chatted with our class, then took a turn around our posted assignments, making kind and cogent comments. It was clear where Peter had picked up his teaching style.

You can see some of Leo’s work here. Those sixteen photos show a tremendous range — natural landscape, industrial landscape, street photography, journalism, and a touch of surrealism. He did portraits, too (click the gallery here).

His best known, and probably most profitable, photo is of eucalyptus trees on the Stanford campus in the fog. It looks like a simple photo and is immediately recognized by anyone who has walked that side of Stanford in the morning. But like most simple things, it is harder to capture than it might appear.

So, the teacher of my teacher has died. I was lucky enough to meet both of them. Who will I teach? My son is already enjoying photography and making some lovely images. Who else?

Merlin Mann posted about getting better at photography by shooting a lot, and that reminded me of an observation in a photography book I read in high school.

The author observed that the difference between an amateur photographer and a professional photographer was a mile of film. I’m pretty sure this was from The Amateur Photographer’s Handbook by Aaron Sussman. If it isn’t, there was a lot of other good advice in there and the book deserves a link anyway. If you don’t have a calculator handy, a 35mm negative is 36mm wide, roughly 1.5 inches, so that is over 42,000 exposures or nearly 1200 36 exposure rolls of film.

Hmm, 42,000 is awfully close to Herbert Simon’s estimate of the 50-100,000 chunks of information needed to become a chess grandmaster. Simon later generalized that to a “ten year rule”, where ten years of heavy labor are needed to master a subject (for a nice survey, see the Scientific American article, “The Expert Mind”.

When I was Photo Editor of The Rice Thresher, I shot around 300 rolls of film in one year, roughly 10,000 exposures. That made a huge difference in my skills as a photographer. Ten years at that rate fits rather neatly with the 100,000 chunks and the ten year rule.

Of course, you have to pay attention to each exposure to make progress. Film is better for that, because you invest time and meticulous care in developing each roll and each print. I bet I’m still an ace at loading 35mm film onto metal reels (in the dark). I can still hear the sound of 35mm acetate smoothly winding onto stainless steel rails. We had three reels that had been dropped and bent, and I kept those on the back of the top shelf in the dark closet, because I was the only one who could load them without destroying film. I think I threw them away when I left the Thresher. They were too big a risk for unskilled hands.

My year in fine arts photography classes was partly a journey through increasing investment in individual frames. First 35mm, with 36 shots per roll, then 6×9, with 8 shots, then 4×5, where each negative is individually developed. I developed 4×5 by hand, gently moving negatives from the bottom to the top of the stack while in the developer.

Digital sure is easy, but I have not learned as much from the 30,000 photos I’ve logged on my digital SLR as I did from the 10,000 frames I shot and developed at Rice.

Karen Schneider writes about her experiences imitating the style of four different writers.

This reminds me of my photography class at Rice. I took a photo of pile of dirty sand under a freeway, and when I printed it, it looked a lot like a Minor White. My prof, Peter Brown, saw the same thing in the print. He explained to the class that we should copy as much as we wanted while in school, because that didn’t work after you graduated.

My faux Minor White was an unconscious copy, but working in someone elses personal style sounds like a really valuable exercise. Maybe I should try Minor White’s style on purpose. He’s not my favorite, but I bet it isn’t as easy as it looks.

I won’t try to copy Peter Brown, because my style already leans in that direction. The closest I can find to a web page for Peter is the announcement that Peter Brown and Kent Haruf won the 2005 Lange-Taylor prize. Check out the photos there, then go get one of his books, maybe On the Plains.