Tina and I are going vegan for September, and we have a backpacking outing planned for the last weekend of the month. Teresa Marrone’s The Back-Country Kitchen is, once again, looking like the best resource.

Breakfast and lunch are not a challenge. I often have a Lärabar for breakfast at home. Oatmeal, bars, dried apricots (only Blenheims), figs, cashews, whatever, will get us through until dinner. But dinner is a challenge.

I pulled out a few backpacking cookbooks and a stack of Gossamer Gear Trail Ambassador cards for bookmarks.

My first resource was Glen McAllister’s Recipes for Adventure, especially because of Philip Werner’s glowing recommendation of his ratatouille.

Ratatouille is almost all vegetables, so it is easy to make vegan, but does not have a lot of calories for feeding hikers. I need to at least add rice. Plus, McAllister’s recipe uses fennel seeds, which my wife doesn’t like.

Red Beans and Rice from McAllister looked good, and since I grew up in Louisiana, it goes on my list of possible meals.

So, I went back to my go-to cookbook, Teresa Marrone’s The Back-Country Kitchen.

Lentil-Bulgur Chili from this book is fantastic, and trivial to vegan-ize (don’t top with cheese). But we might hike with another couple and I made this the last time the four of us went backpacking, so I’d like to make something else.

Mushroom Spaghetti looks like a winner. Use a mix of tasty dried mushrooms with a tomato sauce over spinach noodles. We only need to omit the cheese. Maybe I’ll bring parmesan for our friends.

Ratatouille, hmm I like her recipe better. She sweats liquid from both the eggplant and the zucchini and uses a more traditional spice mix of parsley, basil, thyme, and oregano. Maybe I could use this as a veg with the mushroom spaghetti.

Risi e Bisi (Rice and Peas) looks good, too, and easy to adapt. Use olive oil instead of butter buds and vegetable bouillion. I don’t really need another starch, but I’ll keep this on my list.

Many Beans Salad from Packit Gourmet looks tasty, especially with some rice.

I’m leaning towards the Mushroom Spaghetti, maybe with Ratatouille on the side if I get fancy and want to carry the pots. Or I could repeat the Lentil-Bulgur Chili. Red Beans and Rice would be nice too—I could dehydrate some okra for that. The Packit Gourmet meal is good to have in my pocket if time gets tight. Nice to have choices, and I’m pleasantly surprised that I can find four nights of vegan dinners with only an hour of research in the cookbook library.

In the summer of 1971, my dad and I headed out on our first wilderness backpacking trip in the Pecos Wilderness. The first person we met on the trail was from our home town, Baton Rouge! Of course, we asked him how far it was to our destination, Beatty’s Cabin. He told us, but he added a bit of wisdom. When he went backpacking in the wilderness, he didn’t worry too much about specific spots. His destination was the wilderness, and he was already there. I still remember that—as soon as I leave the trailhead, I’m already there.

This was our first stop on the trail that year, before the meeting. And yes, it was at Noisy Brook Creek, an odd name. 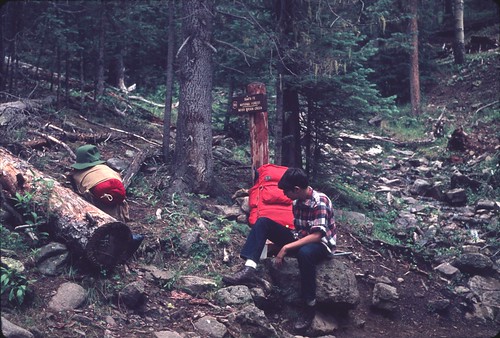 And, if you are still thinking about destinations, this is our tent, a Gerry Year-Round, set up in the meadow at Beatty’s Cabin. I believe this area has been closed to camping due to overuse for a few decades now. 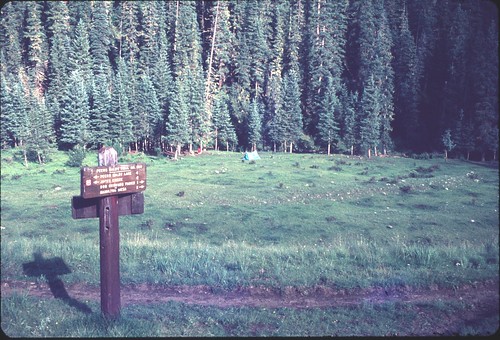 I scanned these photos from my dad’s slides.