I wanted to mount my Morse code key on a base so Scouts could use it at Jamboree on the Air (JOTA) this coming October. A $15 walnut “display base” from Amazon was just the right thing for that. Now we can set up a “Send your name in Morse code!” station.

The key is a CTE-26003A “Navy Flameproof” that I bought when I was first licensed, back in the early 1970’s. I’ve never used it and it was never mounted on a base. It looks brand new. The “CTE” manufacturer code is for “Telephonics”, which matches the name on the key. 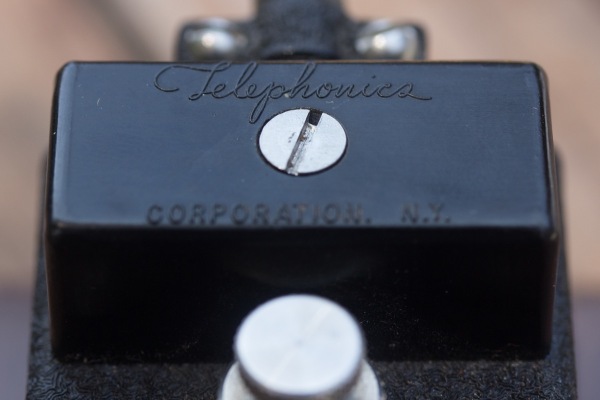 A few hams offer nice bases for sale, but they were either too big or I was too cheap. This black crackle finish metal base is designed specifically for the Navy flameproof key and is reasonably priced at $30, but it is huge and weighs three pounds. Not quite was I was looking for. I also found some very nice exotic hardwood bases. Those were lovely, but I was looking for something more utilitarian.

I spotted the Plymor Solid Walnut Rectangular Wood Display Base with Ogee Edge on Amazon and chose the 6 x 4 inch size as the best match for the key. I picked up some #6 screws and fiber washers, plus some vinyl feet to keep it from scooting around on the desk.

The official Navy name for the key is “KEY SIGNALLING SEARCHLIGHT TOTALLY ENCLOSED TYPE 26003A” (spelling is original). Maybe some of the signaling searchlights were acetylene, so they needed a flameproof key. It is a very nice straight key considering that it was designed for very slow Morse code.

After I collected all the parts, I found a very similar wood straight key base project. That one uses lead shot to weight the wooden base, then felt on the bottom.

I noticed a clever antenna mount on another ham’s roof, so I built one myself. Putting my VHF/UHF antenna at the highest point of the roof has really improved my ability to copy some of the far-flung participants in our weekly ARES/RACES net.

A cradle built from two-inch ABS DWV (drain, waste, and vent) pipe sits across the ridge of the roof. Legs two feet long go down on each side and a two-foot section is a vertical antenna mast.

My antenna is a Diamond X50NA, same as the X50A, but with a weatherproof Type N connector. I did additional weatherproofing with 3M Temflex 2155 rubber splicing tape and Scotch Super 33+ electrical tape.

I had spotted an antenna mounted like this and contacted the ham at that address. Rolf Klibo, N6NFI, replied with an article he’d written for the SPARK newsletter describing the mount. With that, I was off to the hardware store.

I used two-inch ABS DWV (drain, waste, and vent) pipe in two-foot sections. I cut up two of them to make the four pipe sections that go along the ridge of the roof.

The X50NA mounting hardware fits masts up to 2 3/8 inch, which is why I used two inch pipe. For coax strain relief, I used a conduit hanger that fit. Zip ties attach a loop of coax to the hanger so the full weight of the feed line isn’t pulling on the connector. That can rip the coax right out of the connector, or harder to diagnose, pull just one of the shield or center connector loose.

For a commercial version, I’d look at the Rohn NPPK, a steel frame that fits over the roof peak. It is designed to have a rubber mat underneath and four 18 pound concrete blocks holding it down. I’m sure it is far more secure than my DIY plastic pipe mount.

The cooking merit badge requires a Scout create menus “keeping in mind any special needs (such as food allergies)”, but doesn’t provide a source for allergy-friendly recipes. It does give a URL for FARE, but that doesn’t have an organized recipe section.

The next version of the merit badge pamphlet should reference Hiking Free: Allergy Friendly Recipes For The Outdoors because that is the only book I know of on the subject.

I’m not the right person to review it, because I don’t regularly have to deal with food allergies, but she created these recipes for her son’s food allergies. I’ll trust that. I do have several of Sarah Kirkconnell’s other books and recommend them highly.

The author describes it as:

Also, the 2016 edition of the merit badge pamphlet keeps the dangerous trail cooking recipe that uses ground turkey breast. It just isn’t possible to safely store and transport that on the trail (see requirement 1c). I blogged that problem back in 2014 in the Cooking Merit Badge: Trail Cooking Fail post.

Update: Sarah has posted two of the recipes on her blog along with a longer story about how she came to create all the recipes.