OK, so I broke our Vegan September by adding (excellent, imported) Parmesan, but this was a tasty backpacking meal and still vegetarian. I’d use fresh mushrooms and spices for guests at home, but this is a tasty, filling meal on the trail.

This recipe is from Teresa Marrone’s The Backcountry Kitchen.

Mushroom spaghetti is not tomato spaghetti sauce with mushrooms. It is a mushroom sauce over pasta, in this case, spinach pasta.

For two people, I used six ounces of pasta, half the box. This is a pretty light meal, because the dried mushrooms are only an ounce. Add an ounce or so of parmesan and you are at nine ounces for two people. Because of the pasta box size (12 oz.), this is a slightly better meal scaled up to four people.

Because it is so light (about four ounces per person), it would be a great meal towards the end of a longer trek. Everyone is hungrier later in the the trek and this is a filling meal.

It does require two pots, one for the mushroom sauce and one for cooking the pasta. That is extra weight, but on a longer trip a second pot is handy, since you’ll be washing dishes every night. I hope you rinse them with boiling water, since I would hate for you to get the runs on the trail.

But back to the positive: tasty, light, and nutritious. Hint: if you are serving linguine, bring forks.

Tina was reading the first Longmire mystery, so I forgive her for reading during dinner. Also, that really is a kids cereal bowl with the alphabet all around. Lightweight and nearly indestructible, so a great choice for backpacking.

I feel more relaxed at the trailhead when I pack in a methodical fashion. I use our bed. The pack goes at the head, empty, and everything that will go into it is laid out in front of it.

This gives me an overview of what I’m taking and lets me run through the whole checklist.

This is also the time for a last-minute weather forecast check, eyeballing the amount of food, and one more thought about the goals for the trip. Do I take the big camera? Are we teaching plant and animal identification.

Today’s overnighter includes a fancier meal than usual, so I need two pots. I chose my ancient Evernew set. It is soft aluminum, but it is a lot lighter than the Sigg cookset. It is plenty big enough to make mushroom spaghetti for two. I’m also packing the crew-sized first aid kit, which weighs two pounds. I need to make a smaller first aid kit.

I’m pretty happy with the pack weights. Including extra pots, the heavier tent, the bit first aid kit, and with all the food packed (no water), my pack is 20 pounds and Tina’s is 15.

This looks really interesting as a patrol-sized wood-fueled backpacking stove. I have the smallest model, which is great for one or two people. This is sized for more people and should work great for a Boy Scout patrol (around eight). 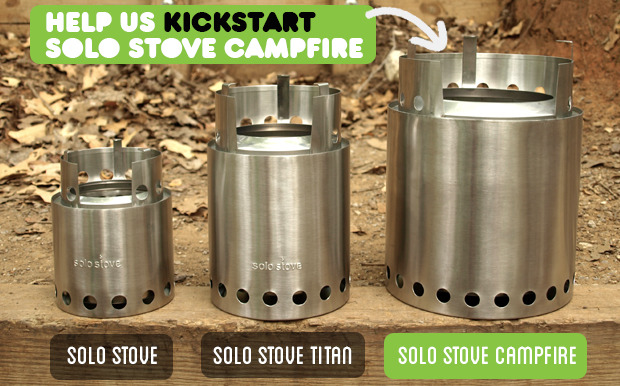 The design is about 7″ in diameter and about 9″ tall. That is roughly the size of a squared-off gallon milk jug, if you make a cylinder around the outside edges. It weighs two pounds, which is substantial, but not bad for a stove to feed a patrol. Remember, no fuel weight, only firestarter material.

If the milk jug analogy doesn’t work for you, it is smaller and lighter than most bear canisters. It would almost certainly fit inside a BearVault BV500.

It is also smaller and lighter than any synthetic sleeping bag. For example, the Cat’s Meow from The North Face is 2 pounds 10 ounces, and packs down to 8″ in diameter and 17″ long. The Solo Stove Campfire is an inch smaller in diameter and half as long when the fire ring is inverted for packing.

This is a “wood gasification” stove, with air feeds at two levels to promote secondary combustion and efficient use of the wood. It can be a real blowtorch if you need that, or you can moderate the heat by limiting the fuel. You get it started, then keep feeding it small stuff. The shell and bottom stay cool because there is outside air drawn in at the bottom. No scorched fire rings, and just ashes to dump out after it is done.

The Solo Stove Campfire Kickstarter level to get a stove is $99. Very tempting. I’m guessing it will be about $120 once they get to full production.